History — How and why did Team Bone start studying artiodactyl calcanei as a way to better understand Wolff’s trajectorial hypothesis of cancellous (trabecular) bone adaptation?

In 1892, Julius Wolff (Fig 1) published his seminal monograph on bone “remodeling” (transformation)*see footnote the observation that the external shape and/or internal cancellous architecture of a bone can change in response to stresses acting on it. Based on observations, assumptions, predictions, and personal tenacity, Wolff’s general ideas have become known as “Wolff’s law” of bone adaptation. Although considered a “law,” this concept actually represents a broad set of hypotheses and observations, many of which are loosely connected and require rigorous investigation (Bertram and Swartz, 1991; Biewener et al., 1996; Cowin, 1997; Currey, 1997). In fact, Wolff’s “law” is used in contexts that are so broad and/or nebulous that they are difficult to rigorously describe or analyze. Figure 2 shows a deer calcaneus (heel bone).

In a strict sense, and consistent with Wolff’s own writing, Wolff’s “law” is synonymous with The Trajectorial Theory of Cancellous Bone Architecture. This is because Wolff placed heavy emphasis on transformation of cancellous bone architecture of various bones when he viewed them in thin sections or in roentgenograms (radiographs). In this context, Wolff’s law states that trabeculae of cancellous bone form (during normal development or healing) with respect to stress trajectories produced by habitual mechanical loading. This ultimately results in an anatomical structure that is well suited, or adapted, to applied stress. The intellectual tradition of Wolff’s “law” can be traced to the early work of the notable Swiss engineer Carl Culmann – see Culmann’s cantilever and crane and the references listed here (Skedros and Baucom, 2007; Skedros and Brand, 2011).

In 1973, Lance Lanyon published a paper in the Journal of Biomechanics reporting in vitro strain data on the calcaneus of adult sheep. In 1974 he also published a study in the British Journal of Bone and Joint Surgery entitled the Experimental Support for the Trajectorial Theory of Bone Structure — Wolff’s law! (See Fig. 3 of a human femur and deer calcaneus, which includes some of your observations of collagen fiber orientation in these bones.) Using stacked rosette strain gauges attached to sheep calcanei, Lanyon showed that the orthogonal in vivo principal strain trajectories were generally aligned with the predominant trabecular tracts. These studies have strongly influenced our work on the artiodactyl calcaneus as a “natural trajectorial structure” and a model for interpreting bone adaptation (See Fig. 4 of x-rays of a thinly sectioned human femoral neck region and deer calcaneus, and see our acoustic paper (Skedros et al., 2006), and additional work on the Trajectorial Theory including: (Lanyon, 1973, 1974; Biewener et al., 1996; Cowin, 1997; Pontzer et al., 2006; Skedros and Baucom, 2007; Barak et al., 2011). 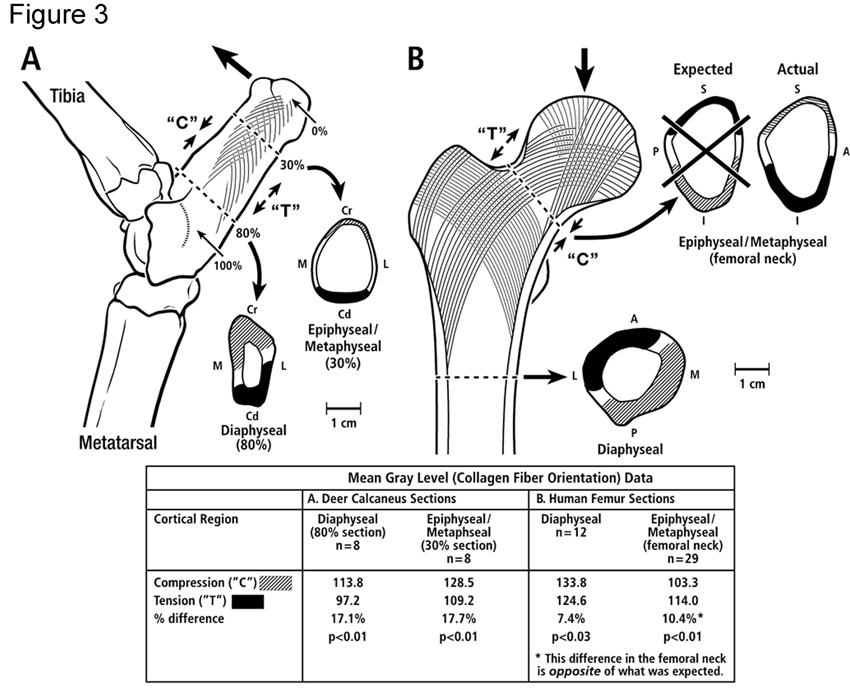 How we got started using the artiodactyl calcaneus model in our research.

In 1988, Dr. Skedros joined the Bone and Joint Research Laboratory (BJRL) at the Veteran’s Hospital in Salt Lake City, Utah. The lab was under the direction of Roy D. Bloebaum, Ph.D. who had become the new director in the Fall of 1987. Dr. Skedros worked as a research fellow for one year between his junior and senior years of medical school at the University of Utah. At that time, Dr. Bloebaum was interested in bone mineralization changes that might occur around femoral stems of total hip replacements. He theorized that there would be differences between the “tension” and “compression” sides of the femoral neck and proximal shaft, and that these would change as a result of alterations in stresses caused by the presence of the prosthesis. Consistent with conventional views, the “tension” side of the femoral neck is considered to be the cranial or superior aspect and the “compression” side is the caudal or inferior aspect. Dr. Bloebaum was pioneering the use of backscattered electron imaging in evaluating the interface between orthopaedic implants and bone. Dr. Skedros was assigned projects related to developing backscattered electron imaging technology, which could be used to quantify relative changes in mineralization at the microscopic level (e.g., within osteons and cement lines, or in larger areas containing many osteons, etc). Team Bone was ultimately created as an emphasis of basic research activity in the BJRL. Dr. Skedros has led Team Bone since that time.

Team Bone’s use of the artiodactyl calcaneus model resulted from a meeting that Dr. Skedros had with his mentor Dr. Dennis Bramble of the University of Utah Dept. of Biology. Dr. Skedros had sought consultation with Dr. Bramble to discuss Dr. Bloebaum’s interest in quantifying relative mineralization changes between the “tension cortex” and “compression cortex” of the human femoral neck. Dr. Bramble thought that the habitual loading of the proximal human femur was too complex to be conceived as a simply loaded ‘tension/compression bone’. Dr. Bramble suggested that the use of the artiodactyl calcaneus might be more useful since it is simply loaded. Dr. Bramble’s graduate student, Russell Howard, had preliminary data showing large mineral content differences between the dorsal (“compression”) and plantar (“tension”) cortices of a small sample of antelope calcanei. Having read Lanyon’s (1974) paper just a few weeks before, Dr. Skedros then realized that the artiodactyl calcaneus could be historically linked to Wolff’s law — it was a natural paradigm of Culmann’s cantilever (Cowin, 2001; Skedros and Baucom, 2007); see our paper on this website in “Publications”.

We are pleased to see experimental support for the trajectorial hypothesis in the results of the studies of Pontzer et al. (2006) and Barak et al. (2011).

*Note: It is unfortunate that the term remodeling is often used in this context since in modern parlance this term describes the process of osteon formation (see the discussion on modeling and remodeling in other sections of this website). The more appropriate term would be mini-modeling of the trabeculae (see the appendix of our trajectorial hypothesis paper (Skedros and Baucom, 2007)).

Lanyon LE. 1973. Analysis of surface bone strain in the calcaneus of sheep during normal locomotion. Strain analysis of the calcaneus. J Biomech 6:41-49.