Cortical Robusticity Threshold Hypothesis – Can the CFO patterns in the human femoral neck be ignored as being adapted for bending?

This hypothesis grew out of our attempts to provide reasonable explanations (in the context of functional adaptation) for the unexpected patterns of predominant collagen fiber orientation (CFO) that we have quantified in the cortices of femoral necks from adult humans and chimpanzees (Skedros, 2011; Skedros et al., 2013a). In addition to these two bone regions, we have described regional patterns of CFO in transverse cross-sections of many other bones. These data show strong correlations between CFO and the strain-mode distributions (i.e., “tension regions” vs. “compression regions”) produced by a history of relatively unidirectional bending (Skedros et al., 2009; Skedros et al., 2011; Skedros et al., 2013b). But there is confusion in the chimpanzee and human femoral neck data: compression-adapted CFO (i.e., oblique-to-transverse collagen) is more prominent in the superior aspects of these femoral necks. This contradicts common sense because it seems very logical that the inferior aspects of these femoral necks receive prevalent/predominant compression and superior aspects receive either tension or relatively less compression (Fig. 1) (Mayhew et al., 2005). Therefore, compression-adapted CFO in the superior neck regions and tension-adapted CFO (i.e., predominantly longitudinal collagen) in the inferior neck regions of these bone regions just does not make much sense unless, somehow, the bending is “reversed”. For example, this could be from very high loading from gluteus medius contractions in humans and Trendelenburg-like “lurching” in chimpanzees.

But we have considered an alternative explanation that shakes the foundation of the seemingly high reliability of using regional patterns of CFO to interpret load history. What if the cortex of a bone is so thin that its matrix ultrastructural anisotropy (e.g., CFO) is not longer as important as it is in a bone with a cortex that is more robust? In other words, could a cortex be so thin (and, hence, the load-carrying function of trabecular bone deep to the cortex is more important) that patterns of CFO in cortical bone no longer have the same biomechanical relevance that they do in more robust bones? We suggest that this is the case between the femoral necks in humans (thin cortices) and chimpanzees (sufficiently robust cortices) (Skedros, 2011). 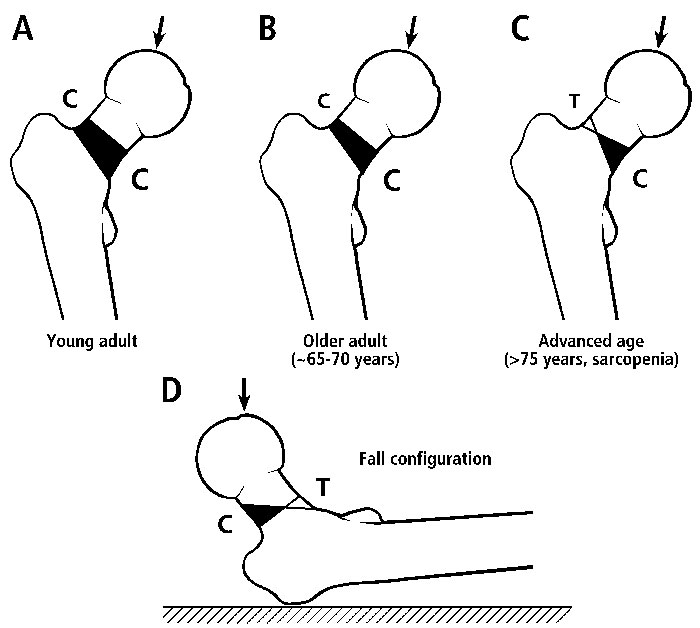 In figure 2 (see below) we illustrate the basic ideas of the “cortical robusticity threshold hypothesis”. Note that there is a zone, or ‘threshold region’, where regional bone material adaptation (which includes CFO) is of little or relatively lesser importance. Here, for example, we argue that the CFO patterns in the human femoral neck cannot be interpreted in the same biomechanical context as the CFO patterns in the chimpanzee femoral neck. Why? Because the human femoral neck has a thin shell that adapts in ways that are more strongly dependent on overall and regional structural adjustments (i.e., cross-sectional shape, cortical thickness, and synergism from trabecular bone in carrying loads) and less dependent on regional material adjustments (e.g., osteon population densities, mineral content, and CFO). By contrast, the more robust chimpanzee neck is sufficiently robust — to the extent that material adjustments are important in influencing regional toughness (and there is little synergism from the trabecular bone in the deeper regions of the neck region). It is for these reasons that we argue that the CFO data from the human femoral neck can largely be ignored in terms of being reflective of a load history of bending. By contrast, we still hold fast to the argument that the CFO patterns in the chimpanzee femoral neck can be viewed as being adapted to a bending load history — similar to the patterns of CFO seen in other limb bones that we have studied, including deer and sheep calcanei, equine and sheep radii, and equine third metacarpals (Skedros et al., 2009).

Skedros JG, Keenan KE, Halley JA. 2013a. Reduced loading of the femoral neck with aging is correlated with regional changes in collagen fiber orientation but not osteon morphotypes or population densities. 59th Annual
Meeting of the Orthopaedic Research Society 37:1419.