Load-Complexity Categories: Simple, Moderate A, Moderate B, and Complex (Torsion/Shear)

The general theme of this section is that regional variations in predominant collagen fiber orientation (CFO) coupled with in vivo strain data suggest that habitual loading of a bone or bone region can be best understood in the context of one of four “load-complexity categories” (Fig. 1). In order to understand the rationale for the criteria used to create the four load-complexity categories, it is useful to start by distinguishing the load histories that are at the extremes — simple bending (least complex) to torsion combined with bending and compression (most complex). Another way to think about these extremes is that there is greater “load predictability” in simple bending and less “load predictability” in complex torsion/bending. Figure 2 shows examples of diaphyseal regions of some bones that can be placed in one of the four load-complexity categories. These four categories are based on the three general/habitual load categories that have been described by Currey (1984), which represent a spectrum from relatively simple to complex loading, respectively: A) short cantilever (e.g., sheep, deer, and equine calcanei), B) curved column (e.g., equine and sheep radii), and C) straight or quasi-curved column (e.g., equine third metacarpals and sheep tibiae). As shown in figure 1, the four load-complexity categories are based on typical ranges of neutral axis rotation; where the neutral axis rotates the most there is prevalent/predominant torsion (the highest-complexity load category). In turn, they help to conceptualize and simplify the characteristic loading patterns of diaphyseal regions where a focus on structural characteristics can be misleading. Additional studies are needed to develop more rigorous, and empirically tested, criteria for distinguishing these categories (see Moreno et al. (2008)). 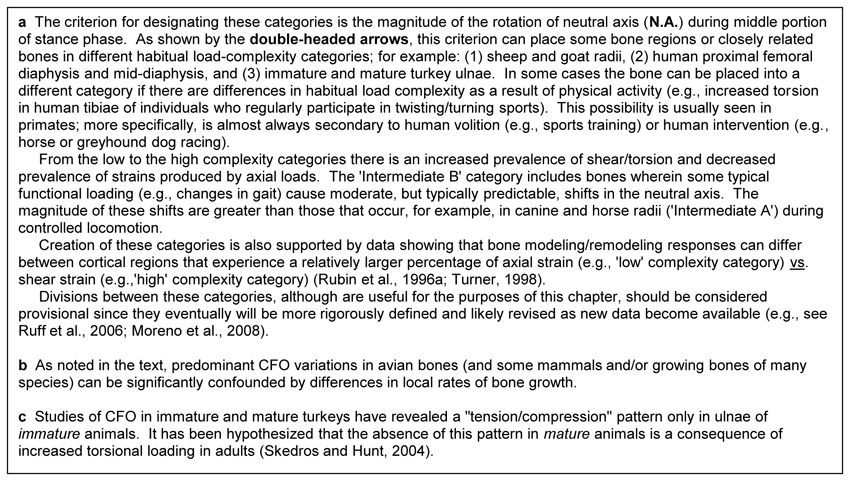 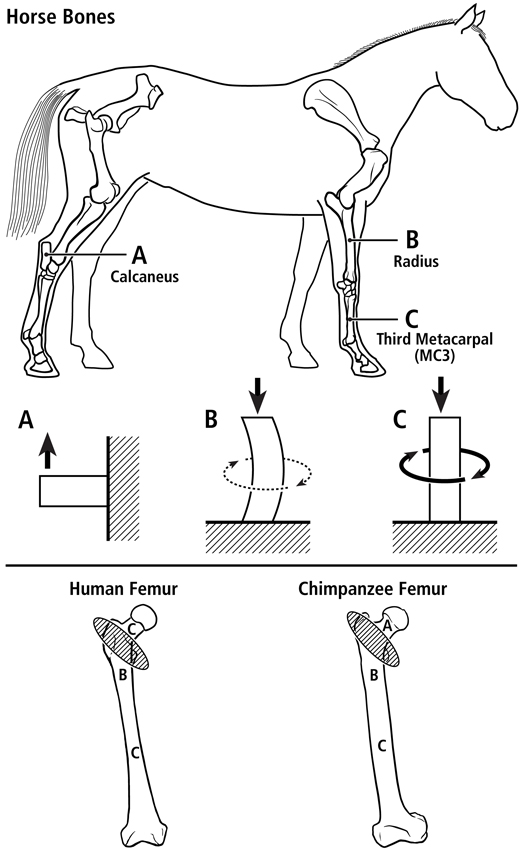 Fig. 2 At top are lateral-to-medial views of the right forelimb and hindlimb skeletons of an adult horse showing a spectrum from simple loading to complex loading, respectively: calcaneus (A), radius (B), and third metacarpal (MC3) (C). The drawings below are simplified renditions of each bone type, showing: A) the calcaneus as a cantilevered beam, B) the radius as a curved beam with longitudinal loading; the curvature accentuates bending. Torsion (dotted line) is also present but is less than the torsion in the MC3 (solid circular line in C), and C) the MC3 with off-axis longitudinal loading producing bending and torsion, the latter being greater than in the other two bones. Several studies reporting in vivo strain data were used to create these drawings (Biewener et al. 1983a; Biewener et al. 1983b; Gross et al. 1992; Lanyon 1974; Rubin and Lanyon 1982; Schneider et al. 1982; Turner et al. 1975).
At bottom are the hypothesized multi-domains for a human femur (left) and chimpanzee femur (right); the letters within the femora correspond to the basic load conditions in the horse bones. The intertrochanteric regions of these bones (indicated by ellipses with oblique lines) are transition zones between the neck and proximal diaphyseal domains. In accordance with predominant CFO data (Beckstrom et al. 2010; Skedros et al. 1999b), these drawings show the speculation that the chimpanzee femoral neck (also more robust and elliptical in cross-sectional shape) receives more prevalent/predominant bending than the human femoral neck.

Becoming proficient at differentiating general features of bone morphology (from a bone’s shape and girth to its microstructure/nanostructure) in habitual bending vs. habitual torsion will help to increase your awareness of the strengths and weaknesses of using histological organization to infer the load history of a bone or bone region. The assertion that predominant bending or torsion are the most representative load histories of bone diaphyses, with most other load regimes being somewhere along the continuum between these, is supported by in vivo strain measurements from bones of various mammalian and avian species that typically demonstrate these load regimes as being most prevalent during peak loading of controlled ambulation (Lanyon and Bourn, 1979; Lieberman et al., 2003; de Margerie et al., 2005). In fact, bending is the load regime that is most highly conserved in many appendicular long bone diaphyses (Rubin and Lanyon, 1984), and bending also produces the majority (>70%) of longitudinal strains occurring during peak loading of controlled in vivo activity (Biewener et al., 1986; Biewener and Bertram, 1993). The bending vs. torsion distinction is also clinically relevant and is related to regional patterns of predominant CFO and distributions of osteon morphotypes. For example, bone failure at the material level directly influences structural failure of the whole bone, and this is especially true in bending- and torsion-related fracture (Ebacher et al., 2007).

When you think of bending think of roughly discrete regions of tension, compression, and shear.

Bending creates a neutral axis, which is a region where longitudinal strains (i.e., along the long axis of the bone) drop to zero in materials that are ideal (isotropic, uniform, and continuous). In other words, the neutral axis is the location (or a “zone” in typical bones because the neutral axis is never stationary) where there is a transition from longitudinal tension to compression. In the neutral axis regions, however, shear strains become large because the maximum strains are obliquely oriented with respect to the long axis of the bone. Although longitudinal strains drop toward zero in neutral axis regions, strain gradients and fluid flux increase — these parameters influence nutrient delivery (Judex et al., 1997). Bending, therefore, creates a dilemma because the mechanical properties, including fracture and microdamage mechanics, of cortical bone differ in tension, compression, and shear (mechanical properties of bone in tension and shear are worse than compression) (see section on the “Shear Resistance-Priority Hypothesis”). Differential histological modifications are necessary in order to more optimally resist and/or accommodate the formation of fatigue microdamage in these common non-uniform, potentially deleterious, strain environments that are engendered by habitual bending (Reilly et al., 1997; Akkus et al., 2003). To reduce its tendency to fracture in regions where physiologic loading produces a degradation of mechanical integrity, regional variations in bone nanostructure (e.g., CFO and collagen molecular cross-links) and microstructure (e.g., osteon morphotypes, osteon density, percent osteon area, and osteon diameter) can modify matrix mechanical properties (e.g., strength, fatigue resistance, and energy absorbed to failure) (Evans and Bang, 1966, 1967; Evans and Vincentelli, 1974; Simkin and Robin, 1974; Carter et al., 1976; Evans, 1976; Moyle et al., 1978; Vincentelli and Grigorov, 1985; Corondan and Haworth, 1986; Yeni et al., 1997; Hiller et al., 2003; Skedros et al., 2006; Diab and Vashishth, 2007).

When you think of torsion think of diffusely distributed shear.

In contrast to habitual bending, if a bone is loaded primarily in torsion, regional variations in nanostructural and microstructural adaptations (Table 1) would not be expected because there are typically no significant temporal/spatial disparities in strain modes. As noted above, the prevalent mode in torsion is shear, and the general/diffuse distribution of this strain mode does not warrant regional histological adaptation (Skedros and Hunt, 2004; Skedros et al., 2011; Skedros et al., 2013). 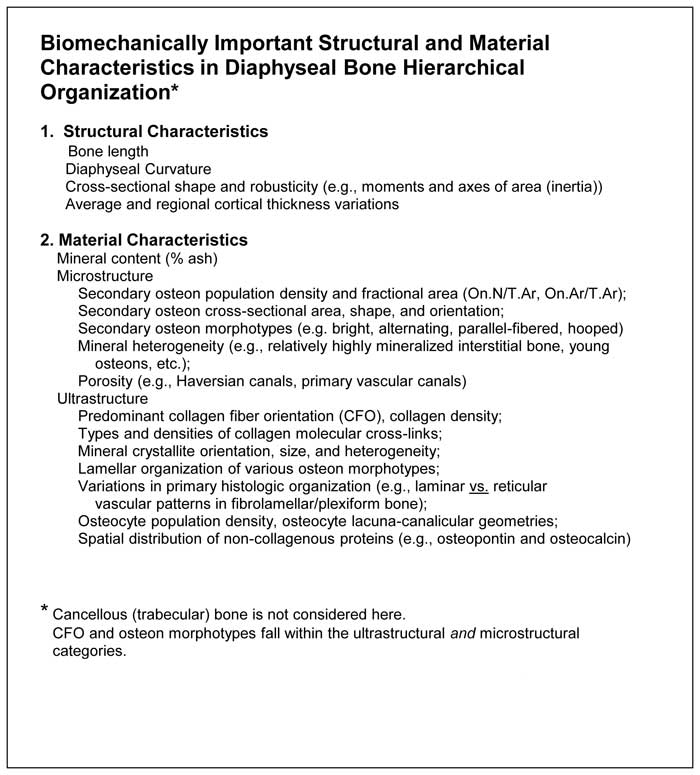 Biewener AA, Thomason J, Lanyon LE. 1983b. Mechanics of locomotion and jumping in the forelimb of the horse (Equus): In vivo stress developed in the radius and metacarpus. J. Zool. Lond. 201:67-82.

Evans FG, Bang S. 1967. Differences and relationships between the physical properties and the microscopic structure of human femoral, tibial and fibular cortical bone. Am J Anat 120:79-88.

Lanyon LE, Bourn S. 1979. The influence of mechanical function on the development and remodeling of the tibia: An experimental study in sheep. J Bone Joint Surg 61-A:263-273.

Schneider RK, Milne DW, Gabel AA, Groom JJ, Bramlage LR. 1982. Multidirectional in vivo strain analysis of the equine radius and tibia during dynamic loading with and without a cast. Am J Vet Res 43:1541-1550.