Fibrous Dysplasia (FD) is a disease that strongly predominates in women in the first three decades of life.  There are two basic forms of the disease that include monostotic (meaning a single bone) or polystotic (meaning multiple bones).  The polystotic version is rare and tends to involve multiple bones on a unilateral side.  It can strike any bone but has a predilection for the proximal femur where it gives rise to the “shepherd’s crook” deformity (Figure #19).  The disease process accounts for this deformity.  In FD, the Gs protein is known to be defective.  This defect in some way prevents woven bone from becoming mature lamellar bone.  Woven bone is less structurally sound and weight bearing regions such as the proximal femur are subject to the recurrent process of fracture and limited remodeling.  Over years this process will dramatically deform bones. 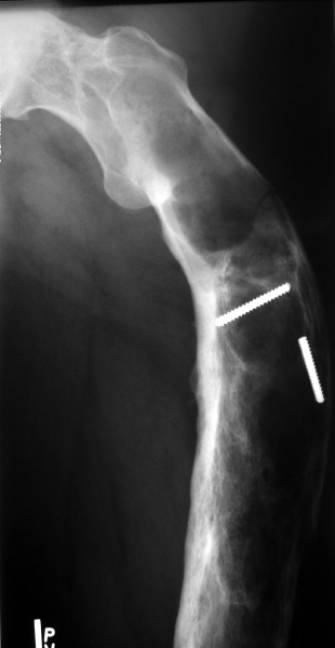 AP plain radiograph of fibrous dysplasia in the proximal femur producing the “shepherd’s crook” deformity.  This patient required internal fixation for a pathologic fracture many years ago and several broken screws were left behind from the subsequent hardware removal. www.sarcoma.org

Radiographically, this lesion has a lytic effect on bones with sharp margins of sclerosis and what is termed “soap bubbly” or “ground glass” osteolysis.  Histologically, the unmistakable look consisting of large amounts of woven bone encompassed within a fibrous stroma is often termed “alphabet soup” or “Chinese characters.” (Figure #18) 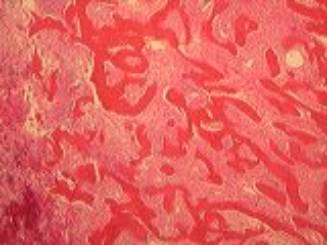 micrograph of fibrous dysplasia displaying the classic “Chinese Letters” made of osteoid. www.sarcoma.org

The Gs defect also has consequences for the skin and endocrine systems.  The classic skin lesion in FD is the “café-au-lait” discoloration.  It shares a name with the lesion found in neurofibromatosis (NF) but has a different look.  In FD the lesion has a rough, irregular border often termed to resemble the “coast of Maine.”  In NF, the border is smoother and termed to resemble the“coast of California.”  There are five associated endocrine disorders that include: McCune-Albright, hyperthyroidism, acromegaly, Cushing’s Disease, and hypophosphatemic osteomalacia. McCune-Albright syndrome consists of fibrous dysplasia in the setting of dramatically precocious puberty.  Five percent of patients with polystotic disease will have McCune-Albright syndrome. Mazabrand’s Syndrome describes polystotic FD with the presence of multiple myxomas. Treatment of FD is difficult.  It will usually burn out in adulthood so most measures are conservative and aimed at preventing and treating deformity.  The high recurrence rates following resection make surgical intervention a poor choice.  Instead, bisphosphonates are employed to help solidify bones.  In adults, instability created by the lesion will be approached with internal fixation and allogenic bone strut grafting.  The risk of secondary sarcoma precludes the use of radiation therapy.  One percent of cases will develop malignant sarcomatous transformation within a lesion.