Ewing’s Sarcoma strikes predominately male patients in the 5-25 age range.  It most commonly involves the pelvis, femur, and tibia; however, it is capable of involving any bone in the body.  This lesion closely resembles pediatric neuroblastoma that strikes under the age of five.  Also, it is directly related to the Primitive Neuroectodermal Tumor (PNET) in that these tumors share the genetic translocation t(11,22).  In a well-understood mechanism, this translocation encodes the FL-1 gene that composes homologous RNA pol II binding sites that place control of cell functions in the hands of the sarc promoter.

These lesions have the radiographic appearance of a centrally lytic lesion that will destroy bone cortex known as “permeative destruction” (Figures #7,8).

Ewing’s sarcoma of diaphyseal bone.  Note the destruction of the cortex which ultimately led to a pathologic fracture. 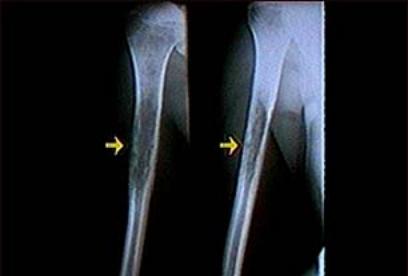 As the cortex is destroyed, the tumor will raise the periosteum creating a “onion skinning” effect on x-ray that is often accompanied by a “hair on end” appearance as bone forms along vessels stretched between elevated periosteum and the underlying bone.  The meta-diaphyseal region is most commonly involved.  Histologically, this lesion will have small round blue cells in nests that cluster in rosettes (Figure #6).

Micrograph of a small round blue cell tumor.  In this case the diagnosis was Ewing’s Sarcoma.
edcenter.med.cornell.edu

This lesion is known for its ability to mimick other lesions, most commonly osteomyelitis.  It will share features such as fever, elevated ESR and white blood cell counts.  Also, necrosis of central regions of the tumor will lead to liquefaction that will resemble pus but fail to culture any bacteria.

Treatment of solitary lesion involves local resection and chemotherapy with survival rates at 5 years of 70%.  XRT is used only in the case of positive margins at resection as the tumor ishighly radiosensitive but secondary sarcomas are of great concern while success rates remain high without its use.  Unfortunately, 20% of these lesions will present with metastases and carry a 30% five-year survival.